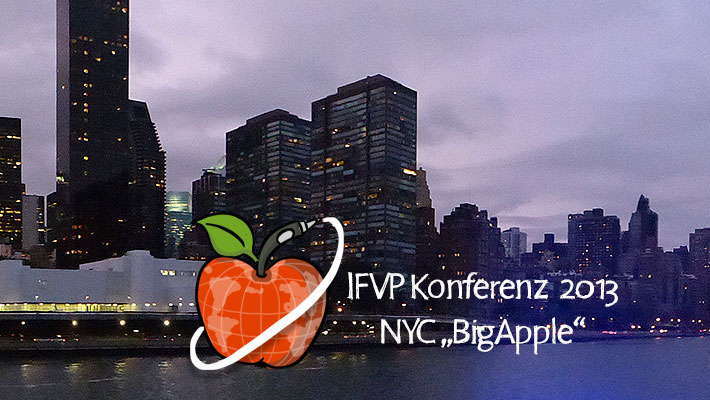 After being absent last year we were very excited to be back attending and supporting this year’s IFVP conference in the city that never sleeps – New York City! The event was held in the downtown Marriott in the heart of the financial district in Manhattan.

IFVP – the International Forum of Visual Practitioners is an international affiliation of professionals who work in Graphic Facilitation and Graphic Recording. The annual international conference draws a who who’s list in this exciting and growing field. The atmosphere is always easy-going with a lot of intellectual property being exchanged.

Our first day at the conference was the pre-confernce day. While the participants split into two groups to attend either the “GR 101” workshop or the “Teaching Graphic Facilitation” workshops; we used the time to set-up and prepare our booth. All the stuff we sent over the Atlantic had arrived safely on two huge pallets and required a good amount of time to unpack and properly display.

A real IFVP Classic: the GR 101- Workshop at the Pre-Conference Day.

The introductions were held late in the afternoon and started with a visual introduction with everybody being asked to draw a picture of themselves and include their contact details.

Introductions at the IFVP conference.

The first official welcome was hosted by Diane Durand in a very unique and special way. Although she already mentioned what she was going to do in social media circles; a lot of the attendees were still surprised with her musical prowess as she sang her welcome to all of the guests. Here is the official video of the welcome ceremony: http://youtu.be/CtKfUhsgINQ

Early in the morning at 7:30 am the official Conference started with a continental breakfast in the breakout area. Diane Durand – the MC of this year’s IFVP conference opened the session with some words about the international advantage of visual facilitation. Wow – it was truly an eye-opening speech about using visual thinking and how it supports our ever increasingly global marketplace. Brandy Agerbeck was the first keynote speaker of the conference and was her usual charming self.

International conferences generally need to follow a strict schedule. So after Brandy’s keynote had ended on time it lead directly to the first coffee break and a visit to the Neuland booth where Guido Neuland was busy explaining and demonstrating our products.

Guido Neuland with a wide assortment of Neuland markers in front of a NY-like skyscraper display . Photo: (c) Stephen Weinstock

The huge interest in our products drew people to our booth around the clock during the entire conference! Word of mouth very quickly spread and our booth was buzzing; which lead to us not being able to attend as many workshops as we would have liked. However, we were more than happy to meet everyone and share how Neuland products support their work.

The Chart from Jim Nuttle.

The one and only workshop Guido was able to attend was Jim Nuttle’s “Cartooning and Lettering” session. The two have known each other since they first met in Berlin a couple of years ago. Originally, Jim was not planning to attend this year’s conference, but when he was asked to fill in for Joern Nielsen from Denmark who had to cancel his workshop he was happy to reschedule.

Here is rundown of some other workshops that also took place on the first day: