A QUESTION OF WILL MORE THAN TALENT

Jørn Nielsen was told that he could never make a living out of his drawing skills.
Today he has a feature animated film, lot of jobs in the advertising as an Art director, and a position at The Walt Disney Company as Creative director standing on his CV. The message is: Believe in yourself and work for the cause! Here is his story:
Jørn Nielsen had no visions of education or stardom when he walked out of the 10th class. All he knew was that he loved to draw. 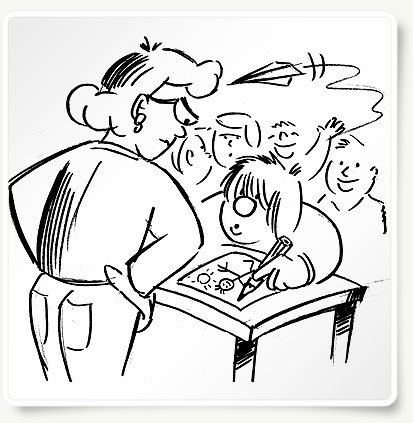 He sees himself as living proof that lack of education, framed diplomas and pompous diplomas are not always the Alpha and Omega for an exciting career. It happens that people come from far outside.
When his friends went out to play, he sat in his room and practiced drawing. It happened with such a convincing fervor that his mom said no to her son’s career counselor from school, who called in to offer him an apprenticeship as a plumber. The supervisor did not believe that the young man could live by his drawings skills, but today many years later, the claim has long been confounded. 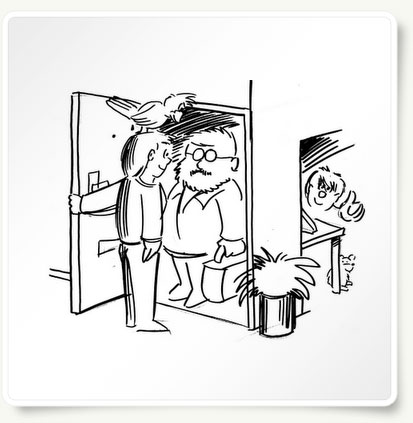 A year after the visit from the supervisor he got hired as a Special effects animator on the animated film “Valhalla“ Later he got a job in the advertising industry, where one employer paid his education to Art director, then he got a job at Walt Disney and is now living on its creative head as a freelancer from his office in Hellerup.
When Jørn Nielsen looks back at what has led him to what he has achieved today, there are two additional factors clear: His inguinal and his classmate Bent. 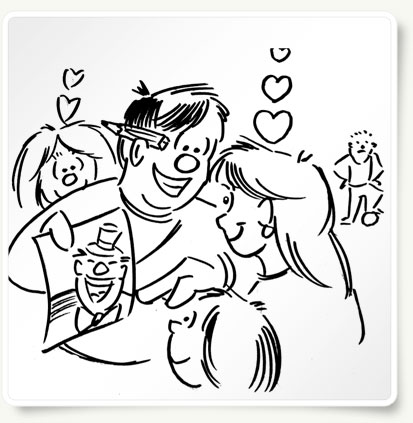 Here is the story of an unpredictable career that started with a friendship:

“When we walked in to eighth grade, Bent was awfully popular with the girls and good at drawing, so I wanted to learn. The next several years we were together every day to make comics and drawing cartoons. Bent was always better to draw than me, and it was fucking annoying. I took lessons in order to constantly improve myself, including courses in croquis drawing, and it was kind of strange for a 16-year-old boy to sit and make sketches for nude models” says Jørn Nielsen and smiles to himself.
Kicked down doors

“We went out of 10th grade and was unemployed. I could not get into college because of poor grades, so my teacher advised me to train as a craftsman. No, thanks, I said! 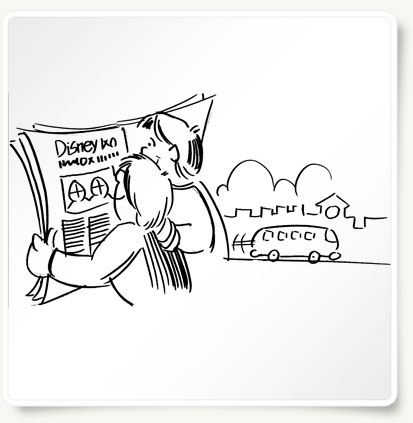 Bent and I had read in a newspaper that a artist called Jørgen Klubien, who additional also was also the lead singer in the band ‘Danseorkesteret’, had come home from The Walt Disney Studios in the U.S. with a animator Jeffery Varab to start their own studio up. We ran him and Jeff on the doors in Skindergade to show our drawings. Our drawings for sure looked like hell, but Jeff and Jørgen were so kind to give us permission to come over and show new drawings every week. In addition, they gave us animation and character art exercises to do at home.
As I said Bent drew better than me, so he was allowed to move his drawing board into their new premises at Nansensgade. I would not be outdone, so I did the same. Jørgen Klubiens partner who was an American, said wondering when I walked through the door at the studio: “What the fuck is this guy doing… “, But I wasen´t thrown out, because there was plenty of room.”
Gradually, the two boys worked for free to lend a hand at the studio and around the time the owners decided that they would make the cartoon called Valhalla. Bent was appointed. He should help to draw the figures, but Jørn did it differently.
“I would so like to be an animator, but when I was not as good as the others, it was excluded.”

Jørn continued to work for free and one day when he had made a special effect with a pair of stars for a Yankeebar advertising, the American said, “You should then create special effects in Valhalla.”
And so it came that Jørn Nielsen was hired to create shadows, water, snow, light and lightning over the next four years on what he calls Denmark’s first and most expensive quality feature animated film, the cost when it was done where 42 million.
“I was manager at the age of 17 years with four employees under me. Since then things have gone downhill, now I only have her here,” he says and claps his dog. She sure listens to a lot during the day.”

Where offered an education

Today, however Jørn is working with something entirely different. He still uses his abilities to draw, but not on cartoon productions. It was then, and he dosen´t miss it at all. The advertising industry is more his Domain, which he got a taste for the Valhalla.
Jørn was hired as a clean-up artist at an advertising agency. It was he who with marker, pencil and ruler had to layout and clean-up what the agency creative heads had scribbled down on drafts.
As one guy from the staff jumped out and started his own agency, his was followed by Jørn. The new, young boss offered to pay if Jørn would spend 12 months of his life to become Art Director, and he accepted.
“It was an incredibly intense and instructive year – a kick in the ass purely creative. I had entered a new business where it was necessary to reinvent the wheel twice. Now it was me who got stuck a toothbrush in hand to come up with ideas on how exactly it could be sold.”
And here comes Jørn into his message that the diplomas are not always relevant:
It’s hard to get into the advertising world, but 70 percent of the employees are self-taught. I’ve never had to show grades or diplomas in my 10 years in business. On the other hand you sell yourself on the campaigns, concepts and drawings in your portfolio, and if the chemistry fits. ”
It was also Jørns portfolio, which in 1997 gave him the job as Creative director and responsible for The Walt Disney Company (Nordic) retail marketing in Scandinavia.

Due to shifting priorities within the Disney Group, his department, however, was abolished in 2003 and since then he has been self-employed:”I have some clients who provide a good foundation for my freelance life. My children still have food in their stomachs, and we able to pay the monthly rent at our house, so it really goes quite well.”

For freelancers, it is about seeing niches, and currently Jørn by finding one of them. A former colleague and friend named Martin Lindstrom, called him last year to offer him a job at a workshop, Martin was hired to do for 250 Disney employees at Disneyland Resort Paris. While the lecture took place, Jørn standing by the wall and on a large pice of paper visualized the messages that came out of his friend’s mouth. The visualization helped the listeners to better remember and understand what had been said, and shown. At that time Jørn diden´t know, but it was called Graphic recording.

Jørn had to think and draw quickly, really quickly, because he had no time to seen the speaker’s/facilitators notes before the workshop. But the task was solved so well, that his friend subsequently used him on several assignments abroad and soon going to Hong Kong to do it again.

Recently Danish Broadcasting used him the same way, and this kind of tasks is a good distraction as compared to sitting at the home office for eight hours every day.

Grateful for his inguinal

Today, 24 years after he left school, he still wonders about the advice he got from his teacher in school: 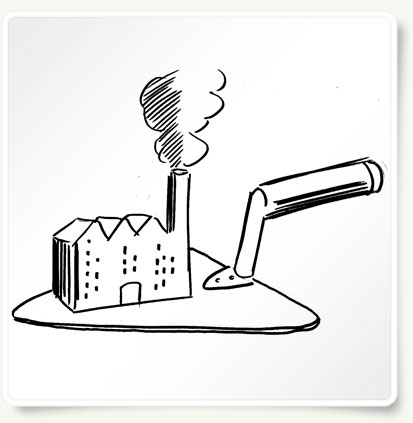 “It kind of funny to think back that I in primary school was told that my drawing skills would´t lead to anything, when a couple of years later I earned three times my teacher’s salary, just from drawing.

“I born and raised in a working class home. My father was a bricklayer and my mother a factory worker,” says Jørn and does think that he has inherited his talent for drawing at home. Actually he never uses the word talent:

“For me it is a question of will more than talent. It’s all about going after what you want in life, believe in yourselves and strive to achieve it. It is your responsibility to create your own success, not your parents , wife or colleagues. ”

And yet! Jørn Nielsen owes his inguinal thanks. Since the special effects-maker was on its highest during the production of Valhalla, he was called to a military session. There was no way he wanted to go into the military and therefore tried to cheat he´s way through the session, without success:

“When I got to the doctor, he took me in the crotch and told me to cough. Then he said:” Well, Mr. Nielsen, you have certainly inguinal hernia. ”

“So I could choose whether I wanted go in the military or not, but I would still have to draw a number. It was so low that I should have been a soldier. That day I praised myself lucky for my inguinal hernia. If I were to be taken out of Valhalla production at that time in nine months time, I had maybe done something totally different today. “